Continuing Power in the Church
12 And through the hands of the apostles many signs and wonders were done among the people. And they were all with one accord in Solomon’s Porch.
13 Yet none of the rest dared join them, but the people esteemed them highly.
14 And believers were increasingly added to the Lord, multitudes of both men and women,
15 so that they brought the sick out into the streets and laid them on beds and couches, that at least the shadow of Peter passing by might fall on some of them.
16 Also a multitude gathered from the surrounding cities to Jerusalem, bringing sick people and those who were tormented by unclean spirits, and they were all healed.

Imprisoned Apostles Freed
17 Then the high priest rose up, and all those who were with him (which is the sect of the Sadducees), and they were filled with indignation,
18 and laid their hands on the apostles and put them in the common prison.
19 But at night an angel of the Lord opened the prison doors and brought them out, and said,
20 “Go, stand in the temple and speak to the people all the words of this life.”
21 And when they heard that, they entered the temple early in the morning and taught. But the high priest and those with him came and called the council together, with all the elders of the children of Israel, and sent to the prison to have them brought.
(Acts 5 v. 12 – 21) 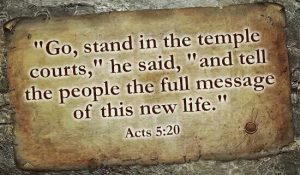 NOTES
We see the number of Jesus-believers growing, as the apostles continue to teach within the temple complex – Solomon’s Porch. It’s interesting to note how the early church, the earliest group of believers, growing at a rate, continued to meet within the temple complex, openly, clearly wanting to encounter God daily, and grow in faith, within the structures and institution of their newly enlivened, Spirit-filled faith.

When I read of people hoping to fall within the shadow of Peter as he walked by, believing that they may receive healing, it reminded me of the woman who wanted simply to touch the hem of Jesus’s garment as He walked past, believing she might be healed. Of course, Jesus felt ‘power’ / energy leave Him at that point, and was able to meet and engage with the woman. Here, the presence of the Spirit of Jesus in Peter and the other apostles may have resulted in healings and miracles of which they were not even aware, as they simply passed by. The reference to people being brought on ‘beds and couches’ might refer to the rich and poor alike being brought (‘beds’ representing greater wealth than the ‘couches’ or ‘pallets’ which were more like a straw mattress). All sorts of people are coming to receive.

This stirs indignation from the temple / Jewish authorities, who had already warned the apostles to stop their teaching, to stop the spread of this message. So, unsurprisingly, the apostles end up in the jail overnight again. This time released by an angel/messenger, they are instructed to go back into the temple and continue to teach ‘all the words of this Life’.
It’s a while before we hear these early believers referred to as Christians, and there are various ways of describing this new ‘faith’ as we go along. Here, you might describe them as those who have the ‘words of Life’, or those promoting the ‘new Life’.

‘The angel told the apostles to go and take their stand in the temple and speak. Wordless symbols (signs), however powerful, remain open to a variety of explanations. From the very beginning, the apostolic faith has been something that demands to be explained, that needs to be taught. Without words to guide it, faith wanders in the dark and can easily fall over a cliff.’ (N.T. Wright : Acts for Everyone).

For this is what I’m glad to do
It’s time to live a life of love that pleases You
And I will give my all to You
Surrender everything I have and follow You
I’ll follow You
AMEN.

(words of the song, by Tim Hughes, ‘May the words of my mouth’)
www.youtube.com/watch?v=F6EkmvRxfHo