The Choosing of the Seven

‘6 In those days when the number of disciples was increasing, the Hellenistic Jews among them complained against the Hebraic Jews because their widows were being overlooked in the daily distribution of food.
2 So the Twelve gathered all the disciples together and said, “It would not be right for us to neglect the ministry of the word of God in order to wait on tables.
3 Brothers and sisters, choose seven men from among you who are known to be full of the Spirit and wisdom. We will turn this responsibility over to them
4 and will give our attention to prayer and the ministry of the word.”

5 This proposal pleased the whole group. They chose Stephen, a man full of faith and of the Holy Spirit; also Philip, Procorus, Nicanor, Timon, Parmenas, and Nicolas from Antioch, a convert to Judaism.
6 They presented these men to the apostles, who prayed and laid their hands on them.

7 So the word of God spread. The number of disciples in Jerusalem increased rapidly, and a large number of priests became obedient to the faith.’
(Acts 6 v. 1 – 7) 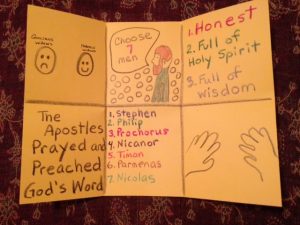 NOTES
A problem and a solution.
Some of the believers felt there was an injustice – that some widows were being overlooked, actually upon racial / cultural lines (Hellenistic Greek vs Hebraic Jewish). Extra help was needed.

‘Daily distribution of food’ – there had been a need early on for the church to be involved in food-banks! Making sure people had enough to eat, redistributing wealth and sustenance.

A distinction of roles is identified, too. The apostles believe they should focus on prayer and biblical teaching, and they need others to focus on serving the poor and vulnerable.

The criteria for choosing were : those ‘known to be full of the Spirit and of wisdom / faith’. Makes me wonder whether we use similar criteria today for chosing those to take on responsibilities in the body of Christ, the church.

Seven are chosen (and we are given their names, including Nicolas – a Jewish convert from Antioch), and are prayed over, and the apostles lay hands on them (a sign of being ordained / set aside, commissioned, blessed for the task).

The result of this dilemma having been resolved is that the apostles continue their ministry of prayer and biblical teaching and ‘the word of God spread, the number of disciples increased, and even those in the Jewish priesthood were becoming believers in Jesus as Messiah. This was a situation which, for the Jewish authorities, would be becoming a real challenge, an outrage.

How good it is to be clear about what we’re called to do (and therefore what we’re ‘not’ called to do), and clear about honouring others for the different roles and responsibilities required to be the church and to further the spread of the good news of Jesus in these days.

PRAYER
Here I am, wholly available
as for me, I will serve the Lord

The fields are ripe unto harvest
but oh, the labourers are so few
So Lord, I give myself to help the reaping
to gather precious souls unto You

Here I am, wholly available
as for me, I will serve the Lord
AMEN.