23 On their release, Peter and John went back to their own people and reported all that the chief priests and the elders had said to them.
24 When they heard this, they raised their voices together in prayer to God. ‘Sovereign Lord,’ they said, ‘you made the heavens and the earth and the sea, and everything in them.
25 You spoke by the Holy Spirit through the mouth of your servant, our father David:
‘“Why do the nations rage and the peoples plot in vain?
26 The kings of the earth rise up and the rulers band together against the Lord and against his anointed one.’
27 Indeed Herod and Pontius Pilate met together with the Gentiles and the people of Israel in this city to conspire against your holy servant Jesus, whom you anointed.
28 They did what your power and will had decided beforehand should happen.
29 Now, Lord, consider their threats and enable your servants to speak your word with great boldness.
30 Stretch out your hand to heal and perform signs and wonders through the name of your holy servant Jesus.’
31 After they prayed, the place where they were meeting was shaken. And they were all filled with the Holy Spirit and spoke the word of God boldly.

32 All the believers were one in heart and mind. No one claimed that any of their possessions was their own, but they shared everything they had.
33 With great power the apostles continued to testify to the resurrection of the Lord Jesus. And God’s grace was so powerfully at work in them all
34 that there was no needy person among them. For from time to time those who owned land or houses sold them, brought the money from the sales
35 and put it at the apostles’ feet, and it was distributed to anyone who had need.
36 Joseph, a Levite from Cyprus, whom the apostles called Barnabas (which means ‘son of encouragement’),
37 sold a field he owned and brought the money and put it at the apostles’ feet.’
(Acts 4 v. 23 – 37) 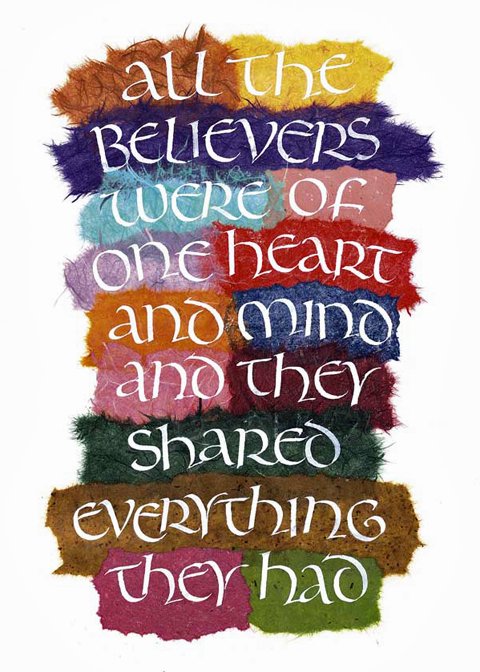 NOTES
The apostles, hearing the report from Peter and John, including the command to speak no more and act no more ‘in the name of Jesus’, pray not so much for protection and safety, but for BOLDNESS to speak God’s word, despite their threats, and for HEALING and MIRACULOUS ACTS to accompany their preaching / teaching, ‘through the name of Your holy servant Jesus’.

Once again, the room shakes, they are ALL filled with the Spirit and they are enabled to speak boldly.

As at the end of chapter two, so at the end of chapter four there’s a wonderful snapshot of the radical generosity of the Spirit-filled community, where there’s such a concern for one another that no-one claims sole ownership of anything they have, but share everything, and sell the surplus to provide for the needs of those around.
There was a depth of unity and oneness about this community (under the growing pressure of opposition) – they talked of Jesus’s resurrection with ‘power’ and ‘grace’.
This is a picture of what God had laid down in Deuteronomy as the path for His chosen people – no-one in need, all sharing, being a strong witness in all the world. Luke is pointing out that, through the Spirit, this vision is realised.

Finally, Luke does as he likes to do (in his gospel, also) and make these things personal, not abstract, and introduces a real person, a character who will feature again and again throughout this book he’s writing: Joseph from Cyprus, who is given the nickname ‘Barnabas’, meaning ‘son of encouragement’. Barnabas becomes the great encourager, and reminds us of the wonderful spiritual gift of encouragement. To be ‘en-couraged’ is to be strengthened, fortified, built up by another. Thank God for those who have this gift today (in contrast with those who ‘dis-courage’, who rob of us our strength, resolve, resilience). Barnabas sells a field on Cyprus (ooh, nice!), and lays the money down at the feet of the apostles, to provide for those in need, to see lives transformed by the powerful gospel of grace.

Of course, this passage is the origin of our LMC Charity for this anniversary year ‘Acts 435 : giving to anyone who has need’.

PRAYER
Brother, sister, let me serve you
let me be as Christ to you
pray that I may have the grace
to let you be my servant, too.

Thank You, Lord, for those who encourage us.
May we, too, be filled with Your Spirit
to encourage, embolden, enliven others, today.
AMEN.