14-21 That’s when Peter stood up and, backed by the other eleven, spoke out with bold urgency: “Fellow Jews, all of you who are visiting Jerusalem, listen carefully and get this story straight. These people aren’t drunk as some of you suspect. They haven’t had time to get drunk—it’s only nine o’clock in the morning. This is what the prophet Joel announced would happen:

“In the Last Days,” God says,
“I will pour out my Spirit
on every kind of people:
Your sons will prophesy,
also your daughters;
Your young men will see visions,
your old men dream dreams.
When the time comes,
I’ll pour out my Spirit
On those who serve me, men and women both,
and they’ll prophesy.
I’ll set wonders in the sky above
and signs on the earth below,
Blood and fire and billowing smoke,
the sun turning black and the moon blood-red,
Before the Day of the Lord arrives,
the Day tremendous and marvelous;
And whoever calls out for help
to me, God, will be saved.”

22-28 “Fellow Israelites, listen carefully to these words: Jesus the Nazarene, a man thoroughly accredited by God to you—the miracles and wonders and signs that God did through him are common knowledge—this Jesus, following the deliberate and well-thought-out plan of God, was betrayed by men who took the law into their own hands, and was handed over to you. And you pinned him to a cross and killed him. But God untied the death ropes and raised him up. Death was no match for him.’
(Acts 2 v. 14 – 28 : The Message) 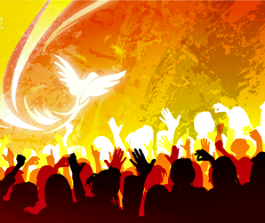 NOTES
The first part of Peter’s incredible message, delivered on that first day of Pentecost, to the gathered crowds in Jerusalem.
Firstly, it’s remarkable that Peter and the disciples now step out in faith, with ‘bold urgency’ to tell people the truth about Jesus, His life, death and resurrection. This is the power of the Spirit within Peter. The same Spirit is in us.

Secondly, Peter refers back to the prophecy in Joel, concerning the Spirit being poured out ‘on all people’. No longer given for certain people for a certain task at a certain point in time, but poured out on all flesh (all kinds of people). This is the same Spirit poured out on us today.

Finally, for today, in v. 22 – 28, Peter spells out the basic message of the life, death and resurrection of Jesus – the man from Nazareth, who taught amazingly well, and did miraculous things; Jesus, who was nailed to the cross and cruelly killed, but whom God raised from death – ‘death could not hold Him.’ These apostles are all witnesses to the resurrection, and are now empowered by the same Spirit who brought Jesus up from the grave – and He is at work in us, today.

PRAYER
There in the ground His body lay
Light of the world by darkness slain
Then bursting forth in glorious day
Up from the grave He rose again
And as He stands in victory
Sin’s curse has lost its grip on me
For I am His and He is mine
Bought with the precious blood of Christ.
AMEN.